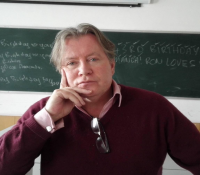 Ron graduated from the University of Cambridge in 1984, where he studied BA English Language and Literature. From there, he became the professional director at the Belgrade Theatre in Coventry.  At Thames TV,  he wrote and produced educational TV programmes . Finding his metier teaching screenwriting at the University of Southern California, he subsequently headed the screenwriting faculty at the London outpost of the New York Film Academy in Holborn. Twenty years ago, he discovered the joys of private tuition/mentoring and has been tutoring for over two decades all around the world.

TEACHING EXPERIENCE & APPROACH
Ron has tutored both online and face-to-face for over two decades, helping hundreds of younger and older students. His experiences include, but are not limited to, a post-graduate student in Moscow, IB candidates in Shanghai and the MYP/PYP programme to royal princes aged 8 and 12 in Riyadh and Medina. He has also tutored in Kuwait, Indonesia, Singapore, Azerbaijan, Italy, Poland and France.

A number of his clients have secured places at prestigious institutions including Eton, Wycombe Abbey, Benenden, Fettes, St. Paul’s and Westminster.

Ron has taught History, English, Drama, Sociology, Film and Performance Skills to A Level , the SAT , the  IBDP(HL) and the Diploma di liceo.  He has mentored adults in Business English, rewritten speeches for foreign born politicians and guided at least a dozen tutees to Oxford and Cambridge .

Over twenty years ago, I discovered the joys of tutoring/mentoring/governing believing the role is all about adapting to the aims desired by the tutee(s). I love both the challenge and the reward that comes with tutoring – seeing a student look at a text in a new light, develop the critical thinking skills that will help them in every facet of their life or seeing the pure delight on their faces when they achieve an outcome they initially felt out of reach, makes it a truly fulfilling career path.

“Ron arrived at the University in September last year. We knew he had an interesting past and expected much. We were not to be disappointed. As a lecturer in English and Film, often his sessions attracted many students from other classes. Like a breathe of fresh air. He is attentive, forceful, funny, demanding the highest standards from his students and himself. Often his students smile as they leave after 100 minutes. With no break. He has given extra hours with his young people. And he gets better work from them than many others. More are industrious. He is the only foreign teacher to expect students to do hours of preparation for each class. His evaluations from them were very high. I hear nothing but good things.” – Li Dan, International Office of Anyang Institute of Technology, China